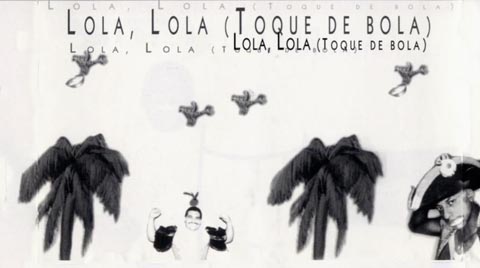 "Lola, Lola" is overflowing with enough deeply-addictive musical hooks to displace not only Cole Porter's "Whatever Lola Wants, Lola Gets" but even the Kinks' classic "Lola, L-O-L-A, Lola" as the greatest "Lola" song of the 20th century. It was one of CH's very biggest hits, and is still "covered" today (2002) by the new Charanga Habanera at most of their concerts. In Calzado's first stab at writing in this groove, he came up with "El temba", which turned out to be such a big hit that Issac included it in his famous "hit parade" song, "La Competencia". And in writing the obligatory sequel, "Riki Ricón", he produced still another huge hit. But "Lola, Lola" is the masterpiece of the three.

The arrangement is another great example of the way Calzado "orchestrates" the voices, combining Sombrilla's rapping with Michel's melodic cuerpo and guías, and bringing in the coro to harmonize with the lead vocal at key points.

The first of many memorable bloques comes in the cuerpo itself. [audio example 24] Clave cultists will scratch their heads in wonderment to discover that although the whole track is in 2:3, this bloque at one point features the entire band playing the first four notes of 3:2 rumba clave in unison!

"Lola" is a great example of CH's unique use of tempo. It's built on the same slow, grinding, trademark groove that Calzado has used for several other hits (including "El temba" and "Riki Ricón"). Most Salsa and Timba clocks in at a tempo of about 93-100 beat per minute, moving upwards to 110 and beyond for super high energy tracks like "Hey You Loca" and "Te pone la cabeza mala", but Charanga Habanera hit on a way to crank the energy up by using a slower tempo. This track not only starts slow (87 bpm) but creates excitement by gradually speeding up and then suddenly dropping back to that tempo at key points, such as this dramatic example, which falls from 91 to 86 bpm in one fell swoop. [audio example 25]

The lyrics are also a big part of the song's popularity, combining clever rhymes with a mountain of double-entendres. "Bola" is an amazing word. Not only does it have multiple standard and slang meanings in Cuban Spanish, but almost all of them have standard and slang English cognates! Bola can literally mean "ball"; it can also mean to be "on the ball" as in Manolín's "arriba de la bola"; it can also have a sexual connotation, much as "ball" does in English; and "toque de bola" can also have a meaning related to the English slang terms "toke" and "bowl". Suffice to say that before the lyrics have run their course, no "bola" has been left unturned!

The lyrics are also rich with references to other songs. One of Michel's guías refers to Charanga Habanera's own "Te voy a liquidar".

In a rap earlier in the track Sombrilla had already subtly alluded to this same track in his warning to Michel:

As pointed out by our resident musicologist, Majela Serrano, Mireya is a recurring character (like our old pal Perucho) who first showed up in one of Leo Vera's guías on the aforementioned "Te Voy a Liquidar". [audio example 28]

Majela also points out another musical cross reference -- this time to the traditional Cuban singer "El Jilguero de Cienfuegos" whose biggest hit was "La caldosa de Don Quique". Sombrilla, after calling his girlfriend Rosa "fat, but she's mine" (Oye Mayito, try that line in the Yuma!), moves on to comparing her to a bowl of soup. But such a bowl of soup! And such an incredible vocal delivery on the part of Sombrilla. Listen to the way he lays back hard on "sabrosita, mamá".

This leads to bloque so bien riquita y sabrosita that it's repeated twice. Here's the first occurrence: [audio example 30] The horns take the spotlight in another bloque which can only be described as vicious, especially if you're trying to learn it! In the following example we first hear a shorter, "teaser" bloque; then the horns mercifully give us a bit of preparation and then the killer bloque hits. For an instant the horns give the impression that the time has stopped, but then Sombrilla comes in rapping as if nothing had happened. [audio example 31] ... Di tú indeed!