Thursday March 26 2009 - Bamboleo Tour Starts Tomorrow!
Bamboleo is in Italy and tomorrow they kick off their tour with a concert at Blue Moon in Cosenza. They have special guest Monica Mesa with them on this tour, and at the April 5 concert in Munich for Cubamemucho Manolín will also make a guest appearance. Click here for the full tour schedule. Note: Not all dates are confirmed so check with the local club before booking any trips! 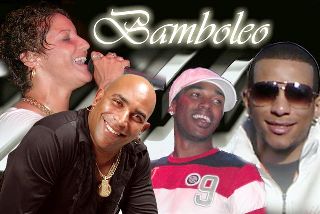 And in Other concert News...
We have a few more dates as well as a few confirmations for Havana D'Primera's debut European Tour this summer. And Manolito y Su Trabuco will be performing in Mexico City at Mama Rumba's in Plaza Loreto on June 13th.

And last but not least Melao at Timbastars.com reports that a number of east coast concerts have already been planned for Los Van Van in the US pending approval of their visas. Other bands are also organizing US tours and as the visas are confirmed we will get back to you with the dates.

Wednesday March 19 2009 - Preliminary Havana D'Primera Tour Dates for France
Gabriel at Yemayá's Verse has been raving about Havana D'Primera for almost a year now, and the Debute Tour of Havana D'Primera will probably be the biggest event of 2009 here in Europe. The new CD should be released any day and is definitely one of the very best CDs of 2009. I have already heard the pre-mix version and it is fuera de liga! I've seen people referring to the bandmembers as the "Habaneros D'Primero" but when this CD hits the stores I think people will simply be calling them "Los Primeros".

The European Tour looks like it will be about two months long, from mid-June though mid-August. We have some preliminary tour dates for Havana D'Primera in France and are still waiting to hear about Italy and northern Europe. For the latest information keep an eye on Odduara Productions. We will keep updating our tour section as more information becomes available. Click here for a preliminary look at the French leg of the Havana D'Primera tour (many dates still to be confirmed). Time to start making your summer timba plans.

Tuesday March 17 2009 - Bakuleye Section
Thanks to help from Mirco at TimbaPorSiempre we have finally been able to add a section for Bakuleye. The band was founded in 1996 by Pedro Pablo Pérez and had immediate success with the album La Fiebre del Ual Ula. The band has included members such as Dantes Cardos and Roelvis "Bombón" REyes and is at the top of the hit parade today with the single La gallina. It will be included on the upcoming CD Desafiando, which is one of the most eagerly awaited CDs of 2009. Click here to check out their new section including a dossier with a more detailed history of the band (in Spanish). 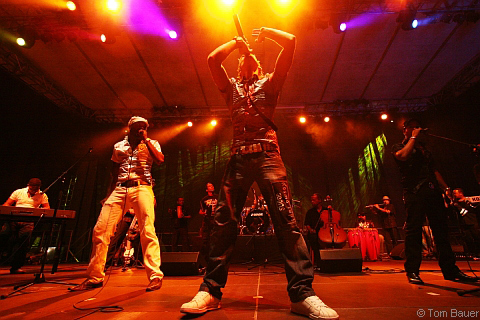 Spain has often proved problematic for Cuban groups for some reason, but don't worry Trabuco fans, all the remaining dates are confirmed so you can confidently go out and buy your ticket. Remember, the concert in Paris had already sold 200 tickets within the first day or two of ticket sales. Don't let yourself get caught at the door with no ticket! Tomorrow El Trabuco will perform in Bari, Italy. Click here for  the full schedule.

The first concert of the tour got rave reviews from Rafael and Alex in Switzerland. They report that the playlist included La Habana me llama, Control, Relámpago, Comunícate, 72 hacheros, Llegó la música cubana, Marcando la distancia, and Locos por mi Habana among other songs.

Sunday March 15 2009 - Concert Report - Pupy y Los Que Son Son in Paris
My computer woes continue so I have not been able to edit any of the concert video yet, however I have finally completed the concert report but sans pictures or video. As soon as I am able to edit the video I will update the report as well. It will include video of the three new singers as well as a tremendous piano solo by Pupy, so check back. In the meantime, you can read all about it here.

Friday March 13 2009 - Manolito Concerts Cancelled in Spain
Rafael in Switzerland said that Manolito y Su Trabuco were superb last night at the opening concert of their tour in Zug, Switzerland. He was also told by the organizers that the three concerts in Spain that were supposed to take place this weekend were cancelled, although we don't have any details. Click here to check out their remaining schedule with a disclaimer for any eventual changes. I will get back to you as soon as I have more information from the tour management.

Thursday March 12 2009 - Los Van Van and Manolito y Su Trabuco in Europe
Pupy y Los Que Son Son have gone home after a very successful tour of Europe where fans were pleased to find that the band still has its magic despite recent changes in some of the key musicians. Stay tuned for the Paris concert report which has been delayed due to technical issues with my home computer. In the meantime you can read the interview I did that night with Pupy (in Spanish) if you haven't gotten around to it yet.

As Pupy was leaving Europe, Los Van Van took the stage. They have already spent a week on tour and will perform tonight in Drammen, Norway. A report from the March 9th concert in Amsterdam seems to indicate that Lele was not feeling well that evening. Both he and Pedrito Fajardo were not on stage that night, although Lele got very good reviews for his performance in London just two days earlier. We hope it was just a 24 hour bug and he is back on his feet for the rest of the tour. Click here to find a Los Van Van concert near you.

Manolito y Su Trabuco have also just arrived in Europe and will play the first concert of this very busy tour tonight in Zug, Switzerland. The band will play 24 concerts in just 25 days, a grueling schedule! Click here for the full tour schedule.

Keep in mind Europeans, we have been spoiled the past several years because the US market ahs been closed to Cuban groups. It is expected that Cuban bands will begin touring the US later this year, so take the opportunity to catch the concerts this time around. Once the US re-opens to Cubans we'll probably be seeing a lot less of our favorite groups than what we have grown accustomed to.

Gabriel at Yemayá's Verse has been raving about Alaín since she saw him live in Havana. He seems to play regularly to a full house and is a favorite of the mikys, which may be why one of the songs on the CD is entitled La miky. 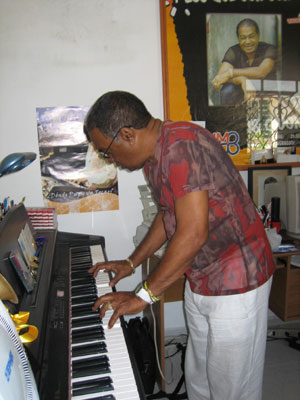 Entrevista con César "Pupy" Pedroso
During the soundcheck at New Morning in Paris, I was able to talk with Pupy for about 20 minutes. I am having computer issues so I am not able to upload the interview in video format like I usually do. Instead I have transcribed the interview. In a couple of weeks I should be able to upload the original video as well. Click here to read the interview (in Spanish). And stay tuned for the concert report which will be up very soon as well.

Updated Musicians' Pages
I have also updated the information about Los Que Son Son in the Muscian's Directory. Click here for the current list of musicians and links to their individual pages.

Sunday March 1 2009 - Pupy Tiene La Secreta
I saw Pupy y Los Que Son Son last night at New Morning in Paris. Despite all the recent changes in the band, Los Que Son Son sound great! The metales are as tight as ever and doing some sort of odd new efecto that I haven't heard before, but I'm told it's called trino or in the vernacular chivo. The rhythm section is a smoothly oiled machine, but a bit different on this tour because timbalero Miguelito Escuriola was unable to come on the tour due to illness, so Bombón is playing drum con timbal. A concert report will follow shortly including interviews with Pupy and the new singers as well as a little look at the new front line en vivo. If you've been worried about how the changes would affect the band, tranquilo que la secreta la tiene Pupy. Click here to find the concert nearest you.