Thursday February 28 2008 - Los Van Van - Los Que Batean 400
El Tren is back in Europe and they are echando humo! The band put on an incredible show in Stockholm last night. I've seen them several times before, but this concert was something special. We all know that Van Van is the elite level of musicianship, but last night they were also number one in showmanship, and not due to choreography but to intensity and passion. The audience shared the band's mood and came out strong, cheering and singing from the opening number Chapeando until the end of the encore, Te pone la cabeza mala. 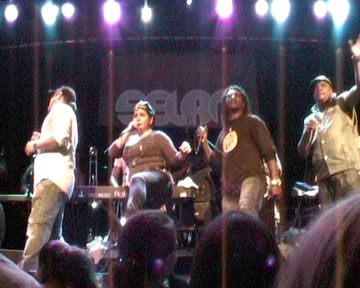 Unfortunately I am leaving tomorrow morning for a week, so I won't be able to file a complete report for about 10 days. But I just couldn't leave without telling everyone to look for the nearest concert, even if you think "Oh, I've seen them before," because this is one train you do not want to miss! The band is at the top of their game.

For those of you who will be attending Cubamemucho in Munich, here is a sneak preview of what to expect. El Maestro Chiqui Dixon, one of the intructors for Cubamemucho, was on hand for the Stockholm concert and Robertón invited him up to dance during Dale dos (Plan B). In just a few days Los Van Van and Chiqui will be reunited in Munich, so for your viewing pleasure click here or on the image below. 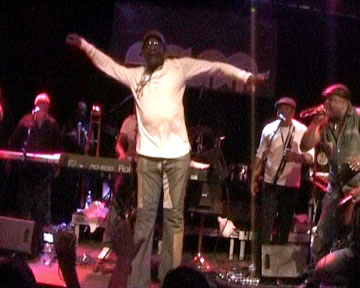 Monday February 25 2008 - Manolito y su Trabuco Celebrate Their 15th Anniversary Today
February 15th in the official birthday of the Trabuco and they will be doing a matinee today at Casa de la Música Habana. I don't yet know what other special events may be planned. In his recent interview with Timba.com, Manolito said they might do a formal concert at Karl Marx and possibly something for "el pueblo" at La Tropical. He also expects to travel to his hometown of Camagüey and other towns in Oriente. 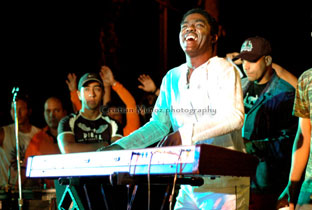 And in other Trabuco news, the upcoming CD has been mixed and is being mastered right now. We may see a release as soon as mid-March! In the meantime, from everyone at Timba.com and on behalf of Timba Geeks around the world, Happy Anniversary Trabuco!

Sunday February 24 2008 - Tumbao Habana Section Added
Tumbao Habana is an orchestra that has long been on my list of bands to see. On my first trip to Cuba their radio demo Amanezco was on the radio all the time and made me an instant fan. Finally on my last trip to Havana I was able to see Tumbao Habana at their Friday matinée larga at Café Cantante. I also spoke briefly with director and keyboardist, Pascualito Cabrejas.

I enjoyed the show, which was full of their hits and included a number of solos by various musicians. They are all very talented, but without question the most amazing solo was by the trombonist who can actually play the trombone with his foot. No, I didn't ask him where in the world he ever got the idea to do that. It will remain one of the great mysteries of timba, at least until I see him again.

Tumbao Habana has only released two studio albums to date, but they have had a string of hits with their demos such as Johana, La Vida Es Silbar and La Familia Cubana. I have to admit that La Familia Cubana gets me all emotional and I'm not even Cuban. Pascualito told me that they are preparing to record a third album this year, and we can expect the hits mentioned above to be on the CD.

The Tumbao Habana section includes a short interview with Pascualito as well as a video page with some of my favorites songs. CD reviews will be added shortly.

Tuesday February 19 2008 - Concert Updates
Paulo FG
Paulo FG will be in Mexico City for a couple of concerts at the end of the month to celebrate Mama Rumba's anniversary party. The concert on February 28 is private and by invitation only, but on the 29th it is open to the public. Of course the concerts will be held at mama Rumba. I don't know if Paulo has any other concerts in Mexico.

La Charanga Habanera
The boys will be in Germany for an intensive 1 week tour, which begins at Cubamemucho on March 9th. Keep in mind that the Munich concert is only open to participants in the Cubamemucho congress so buy your ticket now before they run out and you'll get some of the world's best Cuban dance instruction by day and concerts by Los Van Van and La Charanga Habanera at night. Our own DJ Melao will also be on hand to provide music.

Los Van Van
El Tren will arrive in Italy in just a few days kicking off their 1 month  winter tour in Strincone on February 23.

Other Tours
We are also getting in more concert dates for Haila and for Adalberto Álvarez y su son who will be touring in March and April. Check the tours section for more information, and if you know of any concerts we're missing, please send an e-mail.

Monday February 4 2008 - Urgent News About Manolito y su Trabuco
Last Wednesday I did a telephone interview with Manolito that I haven't had time to publish yet because I am still finishing part 3 of the interview with Aisar Hernández. However, I think some of the information is important to get out now, so that those of you who are in Havana or on the way there in the near future, can plan ahead. The interview will probably be up in MP3 format by the weekend. But in the meantime...

The Trabuco Turns 15
On February 25th Manolito y su Trabuco celebrate their 15th anniversary. The concert details are not set yet, but Manolito would like to do both a more formal concert at Karl Marx and a concert "para el pueblo" at la Tropical. the band will probably also go to Camagüey to celebrate, since Manolito and several other bandmembers are from that area. So if you will be in Cuba at the end of February, keep checking with us. As soon as we have the exact details, we will publish them here.

¡Corre al Café!
For about a year Manolito y su Trabuco have had a steady, weekly gig at Café Cantante. Every Thursday fans have been able to see the Trabuco up close and personal during the Matinée Larga. But nothing lasts forever, and during the interview Manolito said that they will probably stop doing the peña at the Café within a couple of months. He said maybe they will begin doing a matinee at another venue instead, but as of yet, nothing is certain. So if you are in Havana and you get a chance to see the Trabuco at Café Cantante, don't put it off until next week. You don't know how much longer they'll be there.