The French Photographers Are Back!
Timba photographers Indochino and Patrick Bonnard have been busy taking more excellent photos of concerts and of timba icons, respectively.

Indochino has been busy attending timba concerts this summer and will soon update his site, http://www.apsaraimages.com, with many more photos. Here a few samples from recent concerts in Paris by Maykel Blanco y Salsa Mayor and Los Van Van. 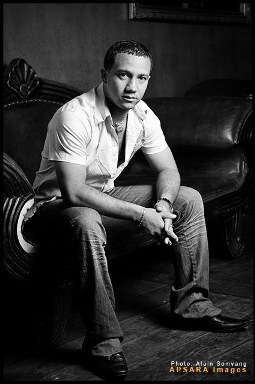 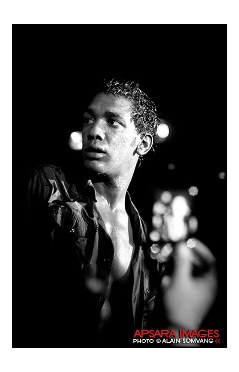 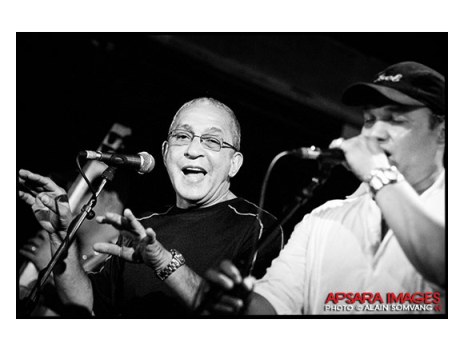 Patrick has been doing a series of photographs of timba icons, old and new. His photos were taken in Cuba and provide a look at some of the great timberos in a more intimate atmosphere. For daily photo updates and stories from his trip (in French) see fiestacubana.net.  Click here for a sample of his recent work that he has graciously provided us at Timba.com. 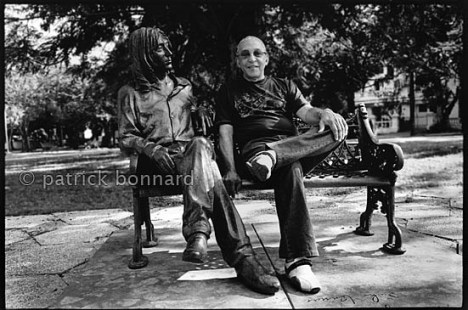 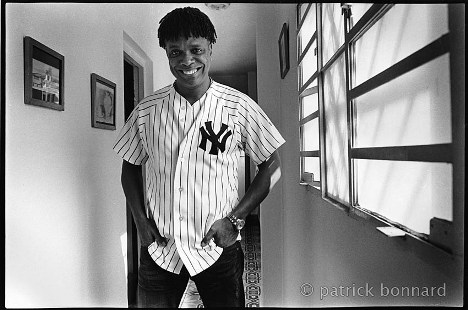 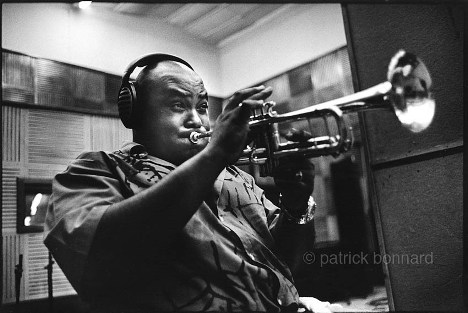 Wednesday July 30 2008 - The New Mayores
Despite their crazy tour schedule I managed to get a little time with 3 of the new members of Salsa Mayor: singer Yasser Ramos, güirero Pedro Yasser González and trombonist Yamil Rivero. I was planning to get a few minutes with Pavel "La Figura" and Pepitín, but the best laid plans may be foiled by unexpected events during a tour, so that will have to wait for another day.

Click on the pictures below to see the guys introduce themselves to the fans (in Spanish). 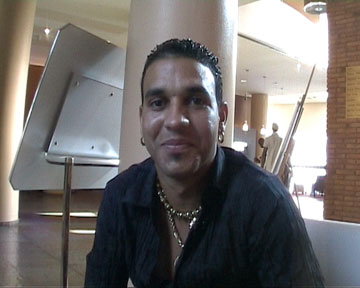 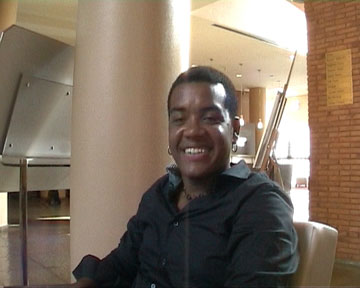 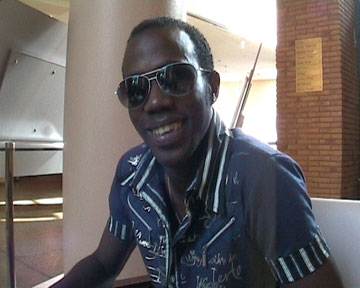 Monday July 28 2008 - Más Trabuco
How sad it is to only be able to be in one place at a time. More information is coming about the Trabuco Tour 2008 and it's almost heartbreaking to hear what I've missed out on. On the 22nd they performed together with Elito Revé y Su Charangón for a full house at Cabaret Sauvage in Paris. The Charangón played the first set, which included a couple of the songs that will be on their upcoming CD release, and the Trabuco closed the concert 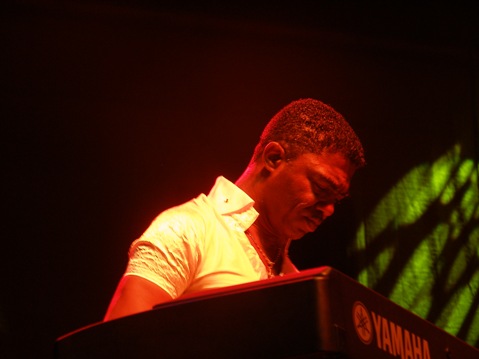 On Saturday the 26th Manolito y Su Trabuco then played the Kapfenburg Festival at Kapfenburg Castle in Germany. If you can complain about anything with a Trabuco concert it is that they now have so many hit songs that you want the concert to last forever. Well in Kapfenburg it almost did. The Trabuco treated the audience of over 1400 people to a three hour concert! You have to admit these guys have stamina. 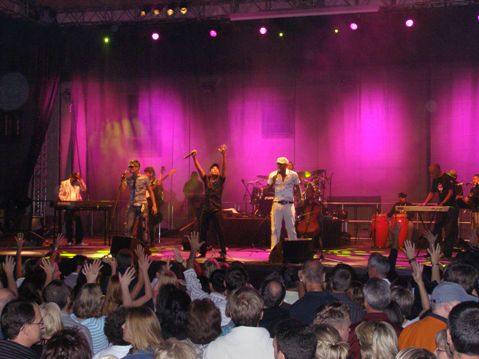 The Trabuco gave the fans 100% for three hours!
photo courtesy of Enclave Musical

The Trabuco is now on the way to Italy where they will be in Turin at El Bandido Festival followed by Fiesta in Rome on Thursday. Click here to see the rest of the band's schedule so you don't miss out on this fantastic tour! 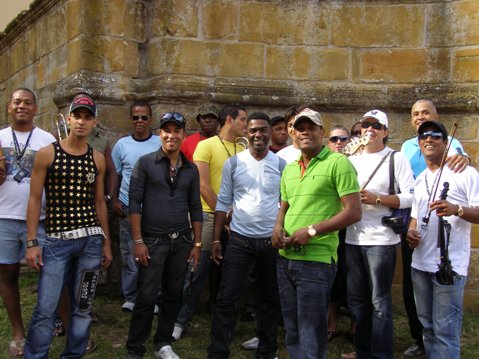 Sunday July 27 2008 - Maykel Blanco y Salsa Mayor Complete Their Tour in Rotterdam
Salsa Mayor are on their way back to Cuba today after a month in Europe. They concluded their tour at the Zomer Carnaval in Rotterdam, the Netherlands. The carnaval was attended by an estimated 50000 to 60000 people and provided a great opportunity for the band to get exposure to a new audience. Front and center were also a number of fans from Holland as well as some that had traveled from Belgium to see Los Mayores live. 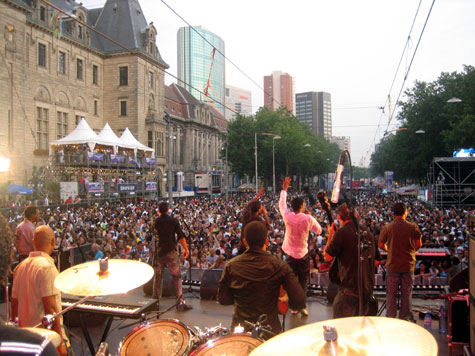 Now that I'm completely back from vacation I will post full reports on the concerts I've seen, including video of the new songs, but for now I leave you with a short interview that I did at 4:00 am this morning as the band was loading up the bus to head to the airport. If you think Maykel seems a bit tired, you're right. Click here or on the image below to watch the interview in WMV format.

If you don't speak Spanish I'll just summarize some interesting points. The new CD Anda pégate will be released in the middle of August by Planet Records. A single, Si le gusta repite, featuring Pepitín on lead, was released a couple of weeks ago in Cuba and has managed to find it's way to Europe somehow where it has quickly reached the top of the timba charts. If you haven't heard it yet, check Timbaporsiempre where a clip is currently first in the media player.

After their tough tour schedule that included more than just a couple of nights without sleep, you might expect Los Mayores to take a week or two of vacation, but they are already scheduled to play Casa de la Música Habana next Saturday. 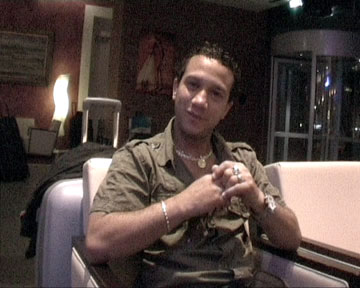 Orlando "Maraca" Valle is back on the eve of his US tour with a new dance CD, Lo que quiero es fiesta. Maraca's music to some extent defies categorization. His repertoire includes salsa/timba, afro-cuban, latin jazz as well as traditional cuban music. Maraca's sello is sophisticated arrangements that still maintain the connection with the dancer, which explains why his songs have such a broad appeal to many different audiences such as world music, Latin jazz and salsa. On those occasions when I have seen the band perform live I have been amazed by the quality of the audio and the professionalism of the musicians. I swear they sound as good live as on CD. If you have the chance to attend one of these concerts, don't miss out on this rare opportunity.

Lo que quiero es fiesta will be released in late August or early September, but we have some short samples of six of the new songs so you can whip yourself into a pre-concert frenzy. Stay tuned for more Maraca updates.

Wednesday July 23 2008 - El Trabuco Kicks off Summer Tour in Madrid
While for some groups the summer tours are winding down, Manolito y Su Trabuco just started theirs with a concert in Madrid on Saturday the 19th. The band will be touring until mid-August so check Manolito's tour schedule to find your nearest concert. In the meantime we have received the following report (in Spanish) and pictures from Madrid. 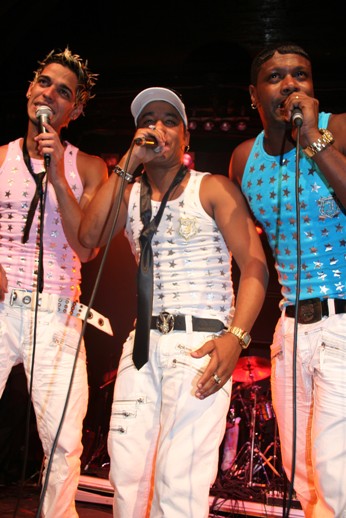 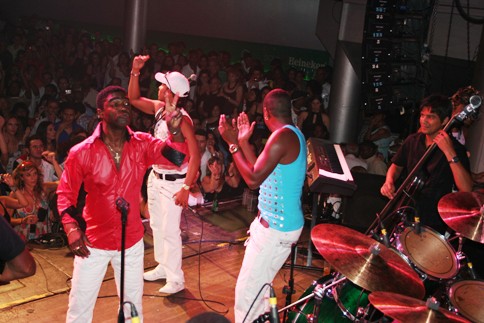 Manolito leaves the piano to conduct his orchestra

English (my translation)
Last Saturday in Sala Heineken we were present for an historic concert by Manolito Simonet y Su Trabuco, all of the Trabuco fans from all parts of the world and from Spain, attended the concert. The audience of all nationalities, danced and sang the songs of the Trabuco, for the 2 hours and 15 minutes of the concert, Manolito covered his 15 years of history and presented the new songs from his latest CD Control.

The singers Amaray, Noro and Miami gave all of their potential and showed us the best face and renovation of the Trabuco with freshness and choreographies of a high level. Manolito Simonet, moved, thanked all the attending public for its active participation in the event and declared that he was very happy to be able to play in the capital of Spain with the fantastic support of the fans.

Sala Heineken hosted the event, one of the concert halls. 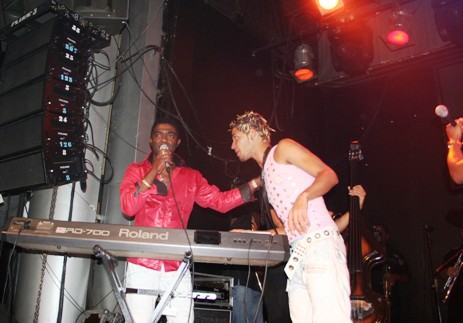 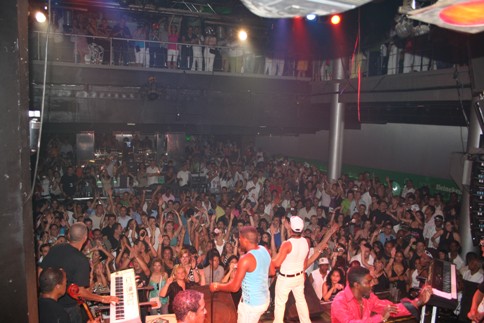 Tuesday July 22 2008 - Maraca US Tour and New CD
Orlando "Maraca" Valle has recently completed his summer tour of Europe with Otra Visión and is starting an extensive US tour with The New Collective that kicks off at Yoshi's in San Francisco on August 27th. The tour consists of 25 dates, some that are still to be confirmed. Click here to find the concert nearest you.

Coinciding with the US tour, Maraca will release his new CD, Lo que quiero es fiesta!, at the end of August or beginning of September. The album is currently being mixed in Florida by Jon Fausty. As soon as possible we will upload some MP3 clips of the new songs as well as some updated video of Maraca y Otra Visión. 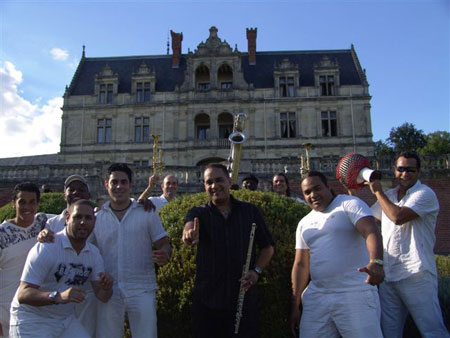 Monday July 21 2008 - My Favorite Rumberito
Took a quick side trip to La Seyne Sur Mer, Verona and Rome with Maykel Blanco y Salsa Mayor to check out the new singers and the new songs. I will post a report shortly, but here is a little clip of Davide, a young Cuban music fan who goes to all the concerts around Rome. He and his young friends are all excellent casino dancers and rumberos. Maykel invited him out to do a little rumba improve during Lo bello por dentro , sung by Yasser. 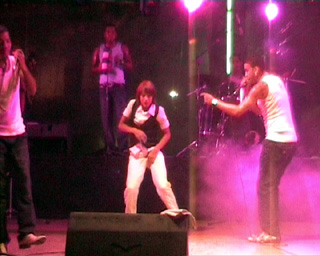 Wednesday July 16 2008 - New Azúcar Negra Singles Out
Leonel Limonta and Azúcar Negra are about to release their fourth album. While El estres, sung by Ailyn, is still riding high on the Cuban playlists, two more singles from the CD have already found their way into DJs collections. Vive el verano is a summer dance hit full of images of el malecon and the beaches, while Mi barrio, sung by Yordi, is an affectionate look at the neighborhood. Visit Azúcar Negra's MySpace site to hear the full version of Vive el verano (scroll to the bottom of the media player).