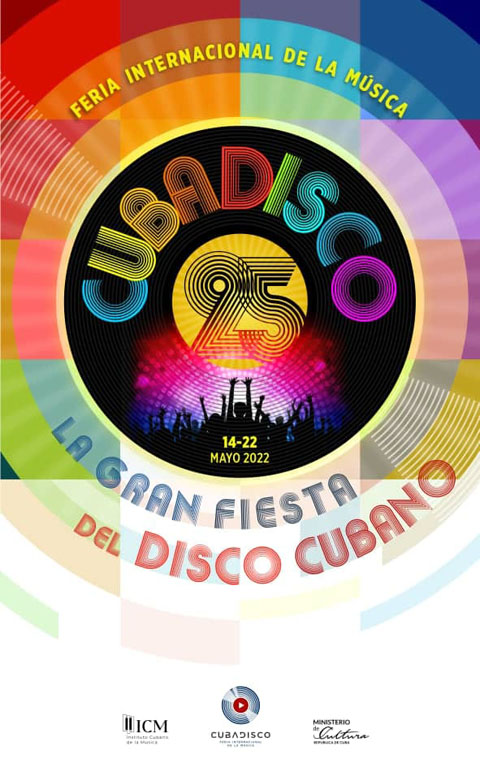 Your correspondent had booked his flights and his casa particular for Cubadisco only to contract COVID in the US a couple of days before he was to depart. Fortunately, more of the event is shown on Cuban television every year, and by extension, you can watch the Simposio Internacional and some concerts on the Streaming Cuba page in Facebook.   You can see other archived Cubadisco video on the CREART  YouTube channel.   Sone additional Cubadisco events will be continuing until early June so keep your eyes on those sources.

Not counting the international prizes and some other special awards but including the regular categories and special prizes related to specific albums,  Colibrí took home the most awards this year with 12 follwed by Bis with 8, EGREM with 7 and Abdala with 3.   Four agencies and two independent productions won awards this year.  The Grand Prize was awarded to Será que se acabo by Alexander Abreu & Havana d'Primera (Abdala), which also won Música Bailable & Diseño de Sonido (the Recording category)

It is worth mentioning that Colibrí, which historically often suffered significant time lags between the completion of an album and its availability to the public, successfully released most of its projects in time to be available now this year.

Although unable to physically attend the event, I am recording radio interviews long distance with many of the winners and you will be able to hear these along with some of the music on my program From The Isle of Music beginning in June.

With special thanks to Lourdes Martínez and the Instituto Cubano de la Música,

Hot off the press thanks to the Instituto Cubano de la Música (and thanks also to Ricardo Oropesa for the additional copy.   We'll do an analysis after we have had a couple of days to digest the results, in the meantime you can download the booklet here

🔸️Phonographic or audiovisual musical productions edited by Cuban record companies, by Cuban and foreign institutions related to the musical work of our country, and independent phonographic or audiovisual musical productions may participate provided they are endorsed by an institution linked to our cultural field.  Independent is understood as the work that has been produced withotu the sponsorship of any record company or institution linked to our cultural field.
🔸️The registered producitons must have been edited between January 1 and December 31, 2021.  Exceptionnaly, some producitons will be admitted that, having been made in previous years (never before 2015), could not be edited previously, and it has not been totally or partially submitted to any previous edition of this event.
🔸️The Cubadisco Award will consider the quality of the productions that are submitted to the contest, and not the work, trajectory of relevance within national music and culture, nor any other of the virtues of the artists whose works are contained in such productions, nor the popularity or sales levels of the productions presented.
🔸️The deadline for the registration of works expires on January 31, 2022.
🔸️The registration of the works in the contest will take place on the dates agreed by the Prize Committee and the Executive Group at the offices of the Cubadisco Awards:
Calle E no. 356, entre 15 y 17, Vedado, Plaza de la Revolución, La Habana, Cuba. CP 10400.
Telephone: (537) 7837 5722. Email: cubadisco@icm.cu
🔸️The works and all the necessary information will be entered in the Cubadisco Computer Platform in which the voting process of the voting members for nominations and awards will take place through the voting pages of the Computer Platform.
🔸️For the purposes of your registration, the work must be delivered in digital format (mp3 in the cases of music, mp4 in the cases of audiovisuals, jpg for graphic design and photography and pdf for text files) with all the data necessary that complement the productions: designs, discographic notes, track lists, fundamental credits, etc. Everything will have to be accompanied by the official digital template designed for these purposes.  This cannot be replaced by any other type of information.
🔸️The institutiions that present works to the contest will be responsible for the registration of their productions before the contest and for the artists the represent.  Once registered, the works may not be withdrawn from the contest under any circumstances.
🔸️ The representatives of the record companies and institutions that register the works will propose the area(s) and categories in which each production can compete.  In consultation with them, the members of the Advisory Group of the Awards Committee designated for this purpose will proceed to their definitive placement in the corresponding category.  Any claim or disagreement with the classificaiton by artits and/or producers of the works must be discussed with the institution that represents them.
🔸️The nomination and award processes will be carried out by the academics in chage of voting in each area and category and verified by the Consultative Group.
🔸️The results of the nomination will be publicly released at a press conference called only for that purpose in the first week of April.  The award ceremony will be held in a ceremony organized for this purpose within the calendar of the Cubadisco 2022 International Fair, which will be held between May 14 and 22.
🔸️The institution that registers the producitons in the contest must certify the editorial rights they have on each work so that:
🔹️in the event that the work is awarded (a prize), you can issue the release of a selected theme for the purpose of publishing a compliation disc of award-winning albums just after the Awards process has finished.
🔹️in the case of audiovisual works, it is clear which works may be used in the multiplicity of television media that accompany the event at the national level, and their presence on the ditial platforms available to the event for its promotion and publicity.
🔸️A prize will be awarded in each category that will be indivisible.
🔸️The Awards Committee together with the Consultative Group will be in change of the selection and delivery of the Special Prizes
🔸️When the opinion of any actor involved in the produciton or execution of works in competition publicly questions the honesty of the event and/or threatens the dignity and morals of any of its members and entities, the Awards Committee reserves the right to take the appropriate measures.  The offical way to ineract with the Organizing Committee and the Awards Committee will be the email cubadisco@icm.cu
🔸️Registration in the contest implies acceptance of its bases.
🔸️The nominations and prizes awarded will be unappealable.