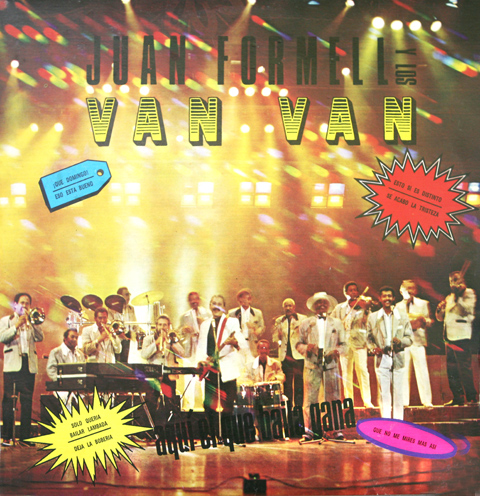 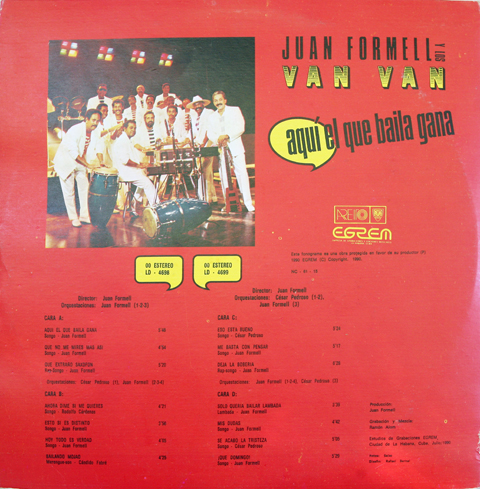 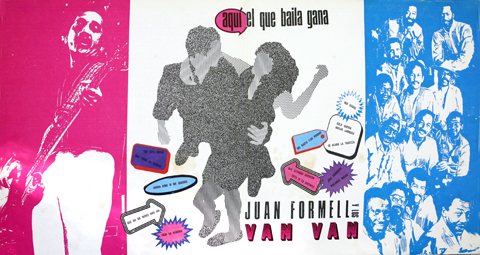 La colección ends with Volume 15 and if Los Van Van had also ended here, this would have been a spectacular finale -- an extraordinary double album -- possibly the best thing they'd ever done -- summing up all of their accomplishments and opening up all sorts of new doors -- throwing down the gauntlet for the next generation. But of course, the end of La colección was entirely aribitrary -- Formell & Co. never even paused to catch their collective breath before surging onwards into the 90s where they reached new heights that must have surprised even Formell himself.

Volume 15 is almost like The Beatles' "White Album" in size and scope and there's no way to discuss specifics without launching into a major article, so I'll just list a few discographical tidbits. Both Mis dudas and Me basta con pensar are inspired up-tempo reincarnations of unreleased songo-bolero B-sides from the early 70s. Aquí el que baila gana predates timba in its usage of its characteristic kick drum pattern (xxxx 0x0x), a figure that's fascinatingly derived, along with the song's intro rap (qué lo que pasa aquí? eh?),  from Cortijo's Oriza. The exquisitely addictive Deja la bobería has a great sax solo, probably by Angel Bonne. Ironically, the quirky Qué extraño sáxofon has a synth sax solo. It might be the weakest song on the album, but listen to the rapped coro, toca que me provoca, another seed that would bear fruit years later in the timba of the late 90s. Finally, the masterpiece Ahora dime si te quieres represents the beginning of the wonderful collaboration between Pupy and composer Rodolfo Cárdenas, which is loving detailed by Ilán Greenfield.

Somebody stop me before I go on. Just get this album and lock yourself in a room with it for a few weeks.

The End of the EGREM Monopoly

Musicologists Ariana Hernández-Reguant and Robin D. Moore are much better qualified to discuss this than I am, but presumably the fall of the Soviet Union and the onset of the "Special Period" placed Cuba in such dire straits that they were forced to engage in a variety of quasi-capitalistic enterprises that included a much bigger emphasis on licensing recordings to foreign labels and allowing artists to make new recordings for companies other than the state-owned EGREM. This both helps and hinders our attempts to reconstruct the history of Cuban music in chronological order. Musically, of course, it lit a major fire under Havana's community of musicians, providing financial fuel for the creative explosion of the 90s.

In any case, it was this, and not stylistic considerations that resulted in the cutoff point of La colección at Volume 15. The litany of Areíto "LD" numbers continues to the mid-90's but EGREM's exclusivity went the way of the Berlin Wall much sooner. 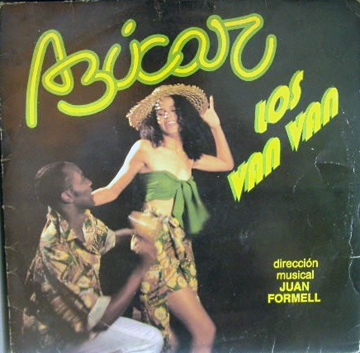 I used to think of La colección as "pre-timba Van Van" and Disco Azúcar onwards as their timba period. In fact, el tren just continued unabated. The only personnel change was an addition - Ángel Bonne on sax, vocals, and most importantly, as an important new composer whose style perfectly complemented those of Formell and Pupy.

The new international face of Cuban music is also reflected in the the title track, named for Cancún's legendary nightclub which hired Cuban bands for 3 month stints throughout the 90s.

This beautiful CD reissue set standards very high for the promise of the advent of foreign labels. It has sublime artwork, full lyrics (in English slang no less), excellent liner notes (in English), personnel, great remastering, and a bonus track, Hasta las cuantas, which is one of Los Van Van's best songs (admittedly a rather long list). It lists the recording date for the whole session as May, 1992 in Havana and reveals that the mixing and mastering was done in Spain. The track order is different, but in some ways seems more satisfying, beginning with the title track and fading out on the addictive coro of Esperando llamada. It's still in print, albeit without the great packaging, but get the original if you can find it. The liner notes are well worth it. There's also a 9-track CD on Artex, which has a different set of fascinating liner notes (in Spanish).

Azúcar isn't LVV's most ambitious or dramatic album, but in many ways, it's my sentimental favorite. If I feel sad or depressed, I can always cure myself by cranking this album up and taking a drive, or cleaning the house. Angel Bonne's sweet harmonies are the perfect foil for Pupy and Formell.

We don't know the exact date, reason, or whether these changes happened all at once or one at a time. If you can fill us in, please do so immediately - por favor! The most shocking change at the time was the departure of Changuito. His replacement, Samuell Formell, had been playing timbales standing with Issac Delgado, but when he joined his father's band, or shortly thereafter, he returned to the drumset that Changuito had relinquished at the beginning of the 80s. Replacing Changuito was of course impossible. The more I study Cuban music, the more innovations I discover that can be traced directly back to this seminal genius of Latin percussion. Samuell, however, had his own thing going, playing with a raw power that had seldom if ever been heard and which inspired a whole new generation of powerhouse drummers like Roicel Riverón, Reinier Guerra, Alexis Pututi and Ludwig Núnez. If you put a group of Cuban music geeks in a room and get them debating about LVV drummers, they're likely to continue arguing until they expire from starvation. I can only say that I've seen Samuell Formell live over 40 times and never failed to get a full-body adrenaline rush that lasted at least an hour after the curtain closed.

The other personnel change didn't seem like such a big deal at the time - Mayito Valdés was replaced by Mayito Rivera, a young percussionst-turned-singer who, as he recounts in the wonderful, must-see documentary Ya empezó la fiesta, didn't catch on with the public immediately. When he finally did catch on, he did so with a vengeance, winning the timba.com readers' poll in several vocal categories. 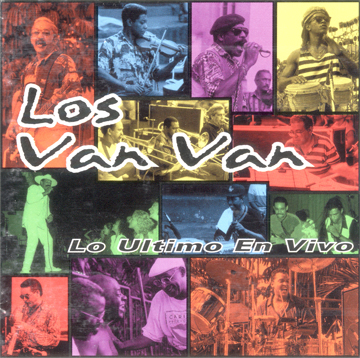 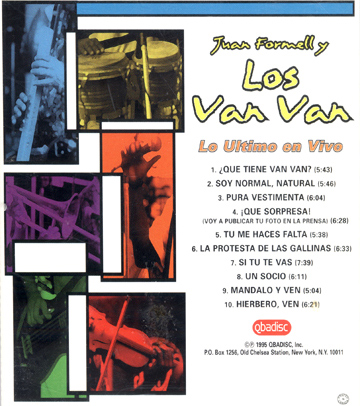 This album was recorded recorded live to digital at La Tropical, but apparently not in a concert situation. The QBADisc version is the only one we've seen, but it's said to have been recorded in 1994 by Caribe Productions, so it's likely that an earlier CD or even LP on that label is out there. If you have it, please send us scans.

In any case, it's one of half a dozen albums recorded during this decade that could be considered LVV's best. Again, it's pointless to try to do a mini-review, and I've run out of superlatives, so I'll stick to the discographical curiosities. Si tú te vas is Pupy's rearrangement of the Formell track from Volume IV. Qué tiene Van Van features one of the most famous and influential piano tumbaos of all time, and Rodulfo Cárdenas' La protesta de las gallinas is a sequel to Que le den candela.

Violinists Leyva and Linares left the group and Pedro Fajardo, of Charanga Habanera entered. Long-time flautist Orlando Canto left and was replaced by Jorge Leliebre, who later began to contribute arrangements as well. Last but not least, Angel Bonne left after Lo último to pursue his solo career (he's recorded 5 albums so far) and was replaced by Roberto "Robertón" "Guayacán" Hernández, who had previously sung with Pachito Alonso. 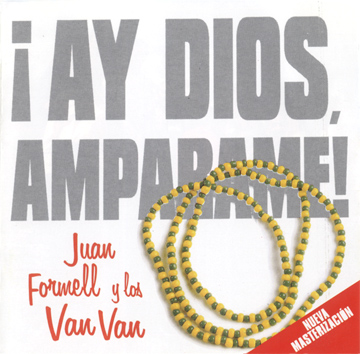 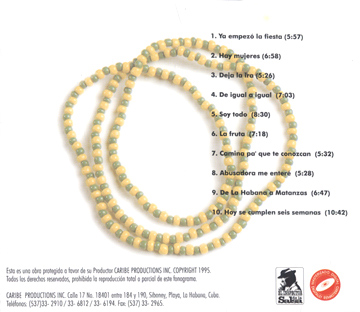 Another in the unbroken string of masterpieces, this includes the great Soy todo, ranked #1 by the readers of timba.com, terrific Mayito versions of De La Habana a Matanzas and Seis semanas, and the debut of Roberto "Robertón" Hernández who sings Deja la ira and the incredibly great Camina pa' que te conozcan. Manolín fans will recognize Deja la ira and Soy todo as the songs that Robertón and Mayito quote in their famous cameo appearances on Pegaíto pegaíto from De buena fe. 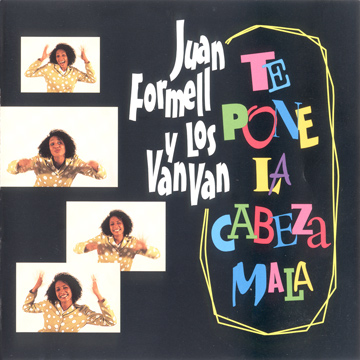 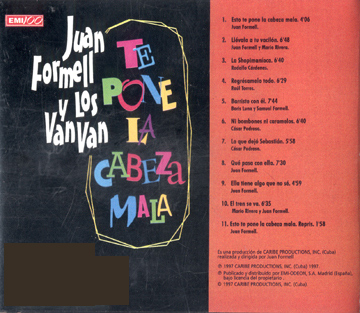 With a gun held to my head, I'd have to pick this as my desert island Los Van Van album. The title track is Formell's most powerful timba dance track and Ni bonbones is Pupy's. And there are at least five other major tours de force. This is 1997, with every timba band peaking simultaneously and waves of creative energy arcing from one barrio of Havana to the next. Van Van rose to the occasion and could not be denied. 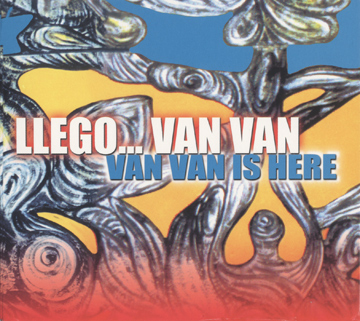 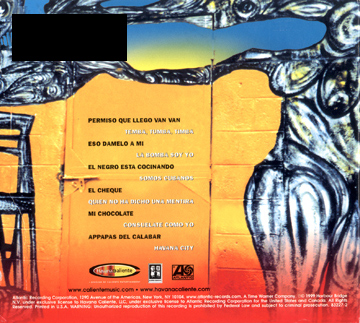 Llegó Van Van won the Grammy in 1999 as well as the timba.com readers' poll for best album of all-time. Every song is great, but I can't say that it's better than Lo último, Ay Dios, Te pone la cabeza, or Volumes II, XIV or XV, but it's close, and in terms of audio quality, it's definitely better than all its predecessors. I'm especially enamored of Mi chocolate, and La bomba soy yo.

Angel Bonne returns to sing the beautiful Havana City, which he also recorded on his great solo album Bonne y Bonne Co. Formell's abacuá rap on Appapas de Calabar is also not to be missed.

This fabulous CD/DVD recording of LVV's controversial first concert in Miami is still available at descarga.com. Snatch a copy while you can. It's an emotional, electrifying concert with an unusual set list, including Qué sorpresa and Ni bonbones ni caramelos. It also has historically interesting footage of the protests outside of the arena.

Just before 2001, Pedro Calvo left the group and, after stints as a guest artists with NG La Banda and Juan de Marcos, formed his own band La Justicia. He was replaced with two new singers. Abdel "Lele Jr." Rasalps, the son of the founding singer, had already sung for some time with Pachito Alonso and then Orquesta Revé. Yeni Valdés came directly from NG La Banda, but began her career with another group that we're trying to identify.

In mid-2001, Pupy Pedroso left to form Los Que Son Son, which immediately became a huge hit in Havana and which has already released 3 classic albums, with a fourth on the way. Pupy's replacement was Roberto "Cucurucho" Carlos Valdés, who had played with Charanga Habanera, Charanga Forever, Issac Delgado and Paulito FG. He began by modeling his style very closely on Pupy's and has since added a few nice touches of his own, as well as contributing compositions and arrangements. Violinist Gerardo Miró left with Pupy and was replaced by the young virtuoso Irving Frontera.

While Juan Formell's creativity has never waned, his health has had a hard time withstanding the hard living musician's lifestyle that JF has subjected it to, so while he still often plays with the band, he hires Pavel Molina to spell him on bass when necessary.